…has style, swagger, and a dry sense of humour – what is there not to like?  The well-travelled engineer from Brittany tells me about how he landed in Compiègne of all places, and what he likes and dislikes about the place. 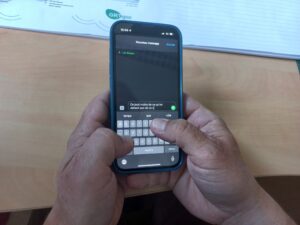 * in my mind today

I’ve been listening to American punk rock music from the nineties, for months, such as Bad Religion – American Jesus, or No FX. The energy is efficient, short, straight to the point.
* in my heart always In my teenage years, I would listen to Led Zeppelin a lot, proper music, not music from TV. Rock n’roll! When I was a kid, maybe 10 or 11, my brother bought a video tape, the Maddison Square Garden concert. That first song…I wanted to become a drummer. The spotlight is on the drummer for the intro…… Did you know that that drummer died by choking on his own vomit? (I didn’t – glad I now have this fun fact to toss during random dinner conversation lulls).

How? I was working abroad, on an offshore platform, 20-25 years ago. The men in their forties and fifties told me that this industry eats up your life, you have to escape. I started looking for another job, but couldn’t find one in my native Bretagne. Then I found something, I could work either in Compiègne or in Gennevillers. I had spent one night in Compiègne, in 2004, as I had a friend who lived in Creil who’d invited me to a UTC party. So Compiègne it was! I moved from Gabon to Compiègne in 2007.

Ayes
* The forest. I grew up by the sea, I didn’t know the forest. I live two minutes away from the forest, where I can be on my own.
* The fact that there are two theatres. This is not common, for such a small city. I used to try to go see plays, before…
* Restaurants. There are lots of nice ones here. Nice food, to compensate for Picardie!
* I also love the Graf’Hit radio station, the UTC radio. Very cool music.

Nays
* Everything and everyone is separated. The students, the lower class, upper class, they don’t mix at all. It is more the case than in other cities. The Clos des Roses, the Triangle d’Or, the differences are huge, two different worlds. It’s like there is a Berlin Wall.
* The weather. It’s not cold enough in the winter, and when it’s hot it’s too hot. There’s always something missing.
* I miss the sea.

Places to be
* The market place Carnot on Thursday mornings. It’s a very small market, with maybe ten stalls. The people are very friendly, and you can find good produce, and good fish. People know you there, recognise you. Very un-Compiègne-y in that aspect.
* The cycle paths along the Oise river. I go to run during my lunch break, or I cycle to work. It ALWAYS makes me happy, whatever the weather. There are also new cycle paths I want to discover.
* The Librairie des Signes.  They’ve got everything, kids’ books, comics, even English books. Reminds me that I should read more. It’s one of the last independent shops. There is nothing more depressing than buying books at the Fnac or in Cultura

I think I think, forever. Because I’m too lazy. I’m supposed to find a house, we’re one bedroom short, but it’s been two years and we’ve made no progress whatsoever. Maybe I’ll move to Margny, or LaCroix St Ouen.

I wish In two years maybe, I could get a position in Germany. But it would be a temporary thing, an expat contract. If we didn’t live in Compiègne, it would be abroad, anyway, not somewhere else in France.