We need to talk. We need to talk about a lot of things, actually, but I know Your time is precious, so I’ll just tackle today’s business.
Would You mind (please) doing something about the Weather People? I know there are other things to deal with at the mo also, but really, these people are impossible. Each time they say something, it doesn’t happen. When they say something won’t happen, it does.

Take Sunday night for example. I did notice the wind, and figured maybe I should check the forecast for the morning, in order to anticipate being blown into l’Oise with my bicycle on my way to work. They said it would be terribly windy the next morning, and surely I’d drown.
So of course, I lay in my bed for quite a while, listening to the wind and considering my options (not going to work – flying off like Mary Poppins – taking a bus after the school drop off, but then arriving late).
Obviously, what happened in fact was that I went to work tired from the worrying, the wind was pretty mild and it was all in vain.

But then they did again last night. I decided to go to work on my bicycle again, which is nothing new, except that this time it was a lesson in a village 18 km from Compiègne, and I’ve never gone to work so far on a bicycle. I felt confident I could do it, but hey, maybe I should check the weather, actually? Well, the bloody Weather People said no rain, and no wind. Guess what?! Yes, You guessed right.
I mean, it doesn’t matter that much, it’s just weather anyway, but it’s infuriating. Also, I didn’t plan enough time, what with the rain and the bloody wind facing me the whole way there, and I was 6 minutes late for my lesson, and I do NOT like being late, it’s unprofessionnal. Really, I should stick to what I generally do, which is stick my head out of the window in the morning, and dress and act accordingly. It’s obviously much more reliable and efficient.

However, I do not wish to be the sort of person who only write to bloody grumble, this isn’t JUST a Letter of Complaint.

I also wish to thank You for making me the sort of person who believes that she can do anything if she wants to (thankfully, I do not want to run marathons or be an astrophysicist, or we’d find out pretty quickly that I’m actually foolishly delusionnal, rather than bravely confident). Thank You for giving my parents the ability to inspire that in me, they believed in me so that I would, too.

And I also want to thank You for the wonderfully scented daffodils growing in the forest along the way, in spite of the astounding quantities of litter, because it strengthens my belief in life, people and the universe. Yes, there are Evil People who litter, but there are also Daffodils. 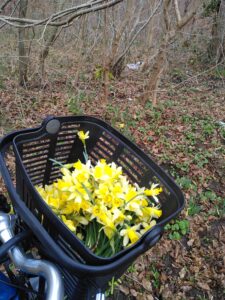 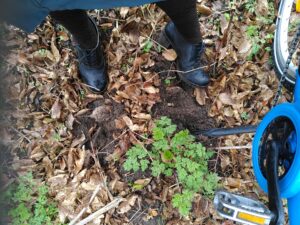